The Town of Hull, MA, with a population of 11,500, has been in existence since our country was founded. It was initially settled in 1622 and incorporated in 1644. As a New England coastal town, it has an extensive history.

Hull constructed its interceptor sewer trunk line in the 1970’s. At that time there was a tremendous amount of Federal 90% grant money available. The government was pushing for towns to build out sanitary sewer piping systems and treatment plants. The original installation had to be very slow and expensive due to the high ground water conditions and very sandy soils. It appears to have been as much of a dewatering project as a new pipe installation project. The 36-inch diameter reinforced concrete interceptor pipe in the ground is now over 40 years old. Being on a fairly flat slope the pipes have experienced internal corrosion due to hydrogen sulfide attack. In the photo below the corrosion is visibly evident. The reinforcing wire, which should be inside the wall of the pipe, is visible. This pipe has lost almost two inches of its original thickness.

When investigating pipeline rehabilitation technologies or replacement options for the interceptor, sewer excavation was not considered as an option because the Town recently repaved the streets where the interceptor was located. It was of utmost concern that no excavation take place. As a result, one of the first choices to rehabilitate the interceptor was CIPP. Slip lining was initially considered but each lateral would need to be excavated to connect it to the new pipe. The housing density is high, and this would have required excavating approximately every 100 feet to reconnect every lateral sewer line which connect to the pipe. As a result, cured-in-place-pipelining (CIPP) was chosen as the best method OF REHABILITATION.

One of the project’s limiting parameters was the existing manholes, which only had a 23-inch diameter frame clear opening. Initially the Town thought only UV lining was an option since this may have been more easily be inserted into the existing manholes. Green Mountain Pipeline Services happened to be contacted during the design phase of the project and assured the Town and the design engineer that the company has routinely installed 36” CIPP liner into and through 23-inch manhole openings.

The project consisted of the following:

All the above tasks were handled directly by Green Mountain Pipeline Services.

Not only was this project a very large scale CIPP and bypass project, it was also a heavy cleaning project as well. It was estimated that the 36-inch interceptor trunk line had 6” to 12” of dirt in it. Over 700 tons, or approximately 500 cubic yards, of debris was removed from the 36-inch diameter interceptor sewer pipe. When it comes to installing CIPP, the line must be 100% clean. There can be no exceptions. In the photos below you can see Green Mountain Pipeline Services had two vacuum jet trucks onsite.

Bypassing the flows was another critical and unusual aspect of this project. GMPS had to run the bypass right down the center of Nantasket Avenue, one of the main streets in Hull. Most, if not all the buildings along this route were  connected to the interceptor with the narrow streets, homes and commercial buildings so close to the street and each other, the only place to run the bypass was right down the middle of the road. As you can imagine this in and of itself had the potential to create traffic issues. Running the bypass down the center of the street was the only feasible way to accomplish the task at hand. The bypass consisted of 2,400 to 3,200 feet of 12-inch diameter HDPE pipe. One street crossing hose ramp was used when the bypass needed to cross a travel lane to allow vehicles to pass. Close coordination with the Town, Police, Fire, School buses and the engineer ensured a smooth and consistent flow of traffic through the work site. For each bypass set up there was a detour plan put together to ensure smooth traffic and emergency vehicle flow the work site. The photos below give some idea of what was involved in bypassing the flows to install a CIPP liner. 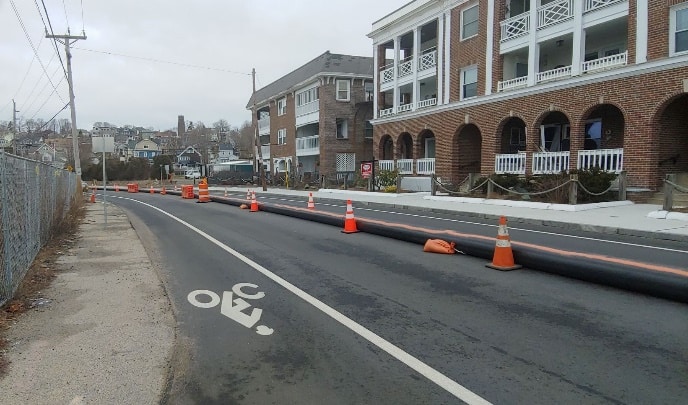 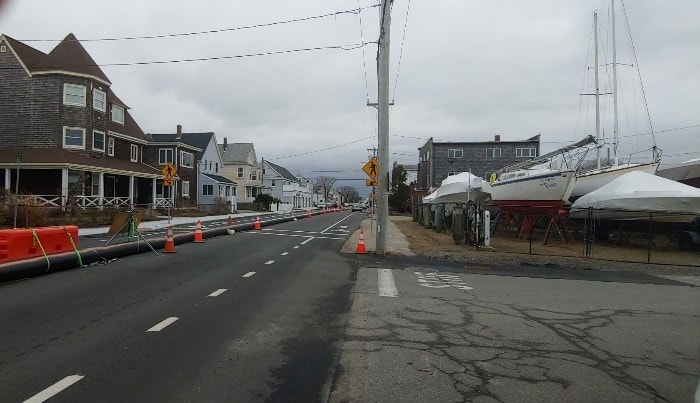 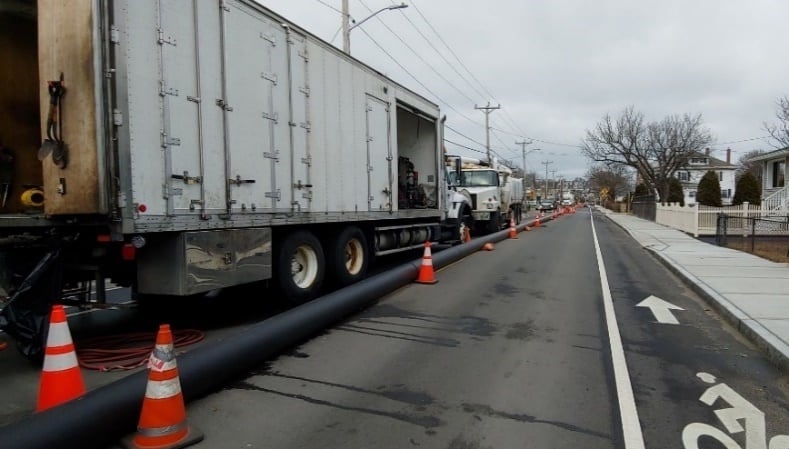 The winter months and weeks through the holidays were kind to GMPS as one of the agreements between the Town of Hull and the company was that if a 12 inch snow storm was forecasted, the bypass would be taken down and the piping would be stored in in a designated staging area before the storm hit, no matter what day the weather was forecasted to arrive. This included Christmas and New Year’s. GMPS was thankful that no snow was forecasted, and field technicians were able to spend time with their families and instead of working in the field taking down a 3,000 ft. long bypass system knowing that they would have to re-set the whole system up again.

Most of the work was completed in the fall of 2019 into January/February 2020. The project was bid in April 2019 and GMPS emerged as the low bidder, with some room to spare. The client was concerned, but GMPS assured them the company was pleased with their bid. One thing that sets GMPS apart from other contractors is their ability to install and maintain the bypass pumping themselves with their own crews. After the CIPP lining was installed, each lateral connection, 176 in total needed to be reinstated and chemically sealed with grout. It is not a simple job to grout laterals in a 36-inch diameter CIPP lined pipe.

All the 10,500 feet of CIPP liner was installed with air and cured with steam. The photo below shows part of the installation process of the CIPP liner. 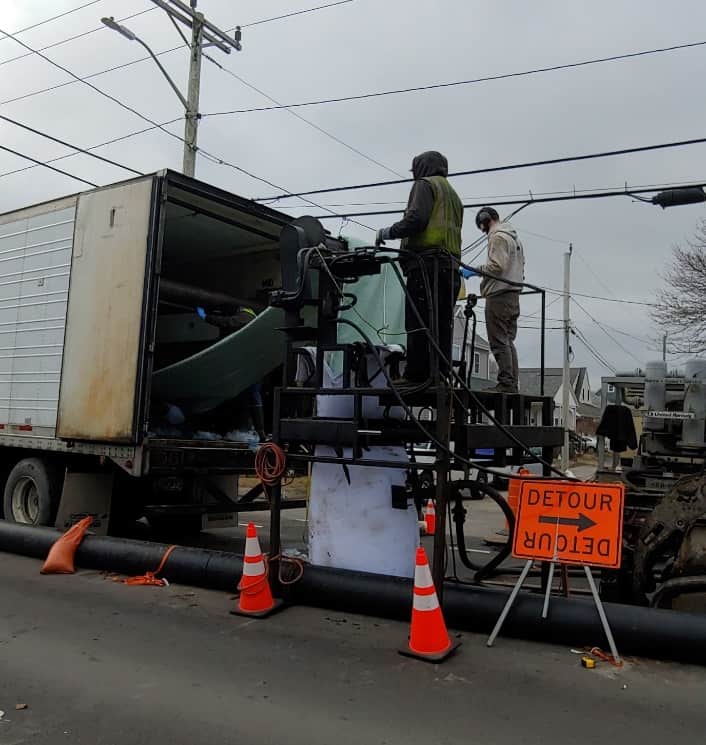 GMPS elected to use American Chemical Grout Co. ACG-AG Acrylamide Grout–MBA premix for this job. The crew worked in shifts until the CIPP liner was installed, all laterals were re-instated, and all laterals were grouted. Below is a photo of a section of pipe, lined with CIPP. 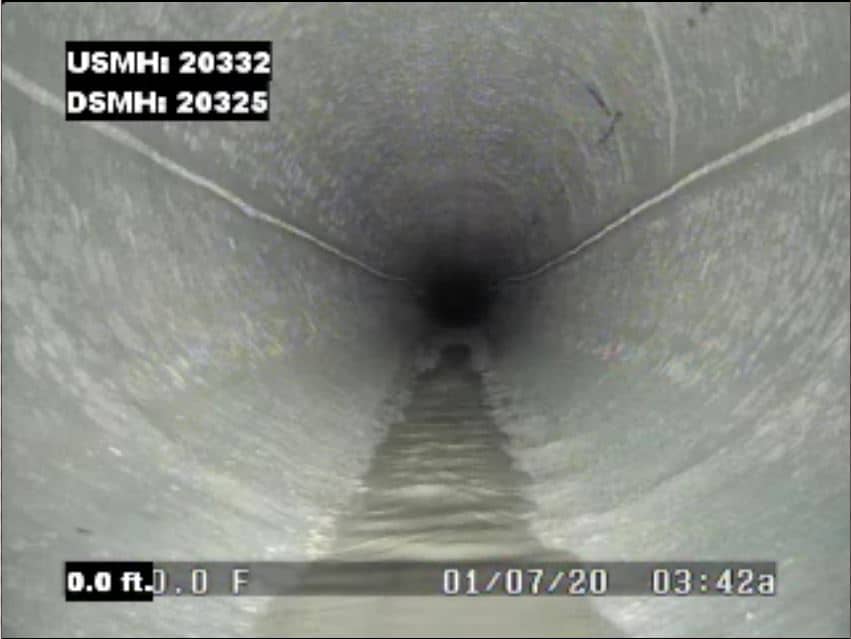 GMPS also rehabilitated all of the manholes totaling 800 vertical feet (VF) with its own crews. The process involved first applying 1/2“ of Strong Seal’s High-Performance mix. After the High-Performance mix was cured, GMPS followed up with 125 mils of Parson Environmental’s Parsonpoxy SEL-80 epoxy.

The project was completed on time and on budget. The Town of Hull was very pleased with all the work performed by GMPS and included additional change order work onto the contract consisting of cleaning and inspection of the remaining portions of the interceptor, manhole rehabilitation in other areas of the interceptor, and other CIPP work. As a result of the full-length liner and complete manhole rehabilitation,

it is evident that groundwater infiltration has been significantly reduced over the course of the project based on trend data using average daily flows measured at the wastewater treatment facility.

The work was performed for the Town of Hull Sewer Department with engineering services provided by Woodard & Curran.