The City of Norwalk (City) is a coastal community located in southwestern Connecticut, in southern Fairfield County and is on the northern shore of the Long Island Sound. Norwalk lies within the New York City metropolitan area as well as the Bridgeport metropolitan area. Norwalk has grown to a residential population of around 85,000 people with many more working within and visiting the City on a daily basis. This generates a significant amount of flow to the City’s Water Pollution Control Facility (WPCF).

The City’s collection system is comprised of approximately 200 miles of pipe, 22 pump stations and 6,000 manholes. The initial system installed in the late 1800’s was a combined system with flows conveyed to outfalls on the Norwalk River and Harbor. In 1931, a Water Pollution Control Facility was built on South Smith Street.  The City’s WPCF handles approximately 13 million gallons of flow per day (MGD) during dry weather. Think about that, 13 million gallons per day flows to the Norwalk WPCF. That is a lot of water.

In every collection system in the country, when it rains, flows tend to increase to the Wastewater Treatment Plant (WWTP). These “wet weather flows” are often the result of infiltration such as leaks into the sanitary sewer system largely due to aging infrastructure.  All water flowing to the WWTP, including dry weather flow and wet weather flow, flows to the WWTP 24 hours a day, 7 days a week non-stop. This water can never be turned off like the water in a water main.

Over the last twenty years, the City has taken steps to ensure the longevity of its collection system by inspecting and rehabilitating many of its pipelines. In 2001 to 2005, the City inspected 152 miles of pipelines per NASSCO PACP coding. The reports rated each section of pipe into five categories to determine where best to allocate capital monies. In 2005, the WPCA developed a collection system master plan to identify and implement long-term repair/rehabilitation and capital improvement programs for the sanitary sewer system. With these ongoing improvements, the average daily flow going to the WPCF has decreased by approximately 1 MGD.

The WPCA has a 10-year agreement, ending in 2030, with SUEZ Water Environmental Services Inc. (SUEZ) for the contract operation of its collection, pumping and treatment facilities. SUEZ performs cleaning, CCTV and NASSCO PACP grading of pipe assets to ensure an inspection/review of all assets at a minimum of every 10 years.

The City of Norwalk also works closely with Harbor Watch, a local non-profit organization. The mission of Harbor Watch is to improve water quality and ecosystem health in Connecticut. Each day Harbor Watch strives to reach this goal through research in the lab and field, collaboration with our municipal partners, the City of Norwalk and education of students and the public. Harbor Watch addresses pollution threats to Long Island Sound and educates the next generation of scientists through hands-on research and experiential learning.

The City’s consultant put together the bid documents and awarded a contract to Green Mountain Pipeline Services (GMPS). Founded in 2003 and based in Bethel Vermont, GMPS will utilize no-dig trenchless techniques to perform manhole and pipeline rehabilitation repairs.

GMPS has been successfully using Strong Products for its manhole rehabilitation products for over twenty-five years. The photos below show an example of where the MS-2A cementitious lining product was used. When the manholes needed an additional protection from corrosion a protective layer of epoxy, Parson Products Parsonpoxy FP was used on top of the MS-2A. Any potential infiltration was eliminated utilizing American Chemical Grout Co.’s acrylamide ACG-AG acrylamide chemical grout.

Before and after photo of manhole rehabilitation with cementitious liner 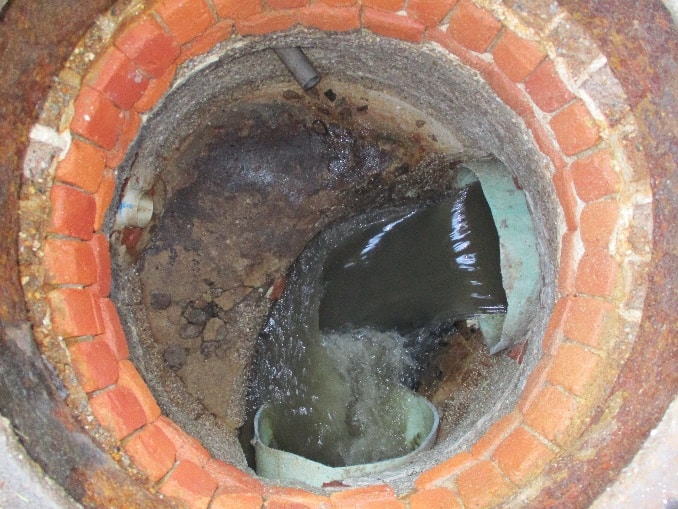 Manhole is prepped before application of the cementitious liner 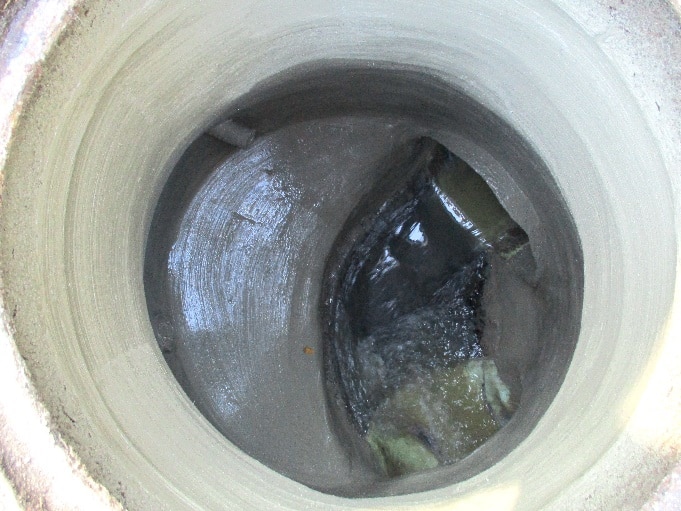 Manhole after cementitious liner Note: the chimney walls and table were completed right up to the newly installed CIPP liner 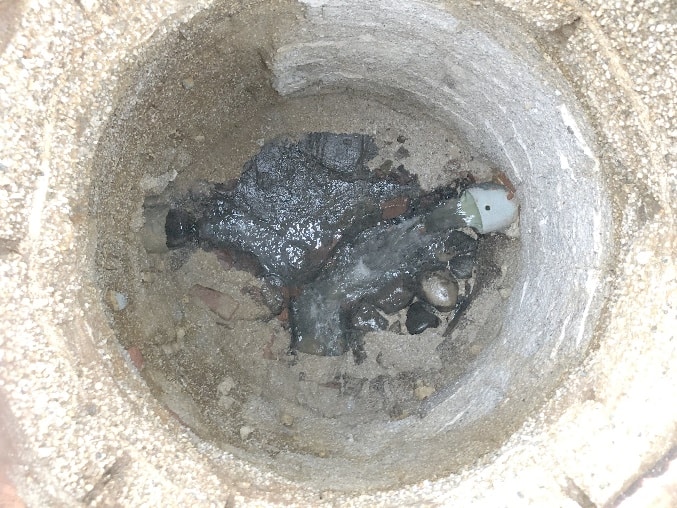 Manhole is prepped before application of the cementitious liner, note the inverts almost do not exist due to the deterioration 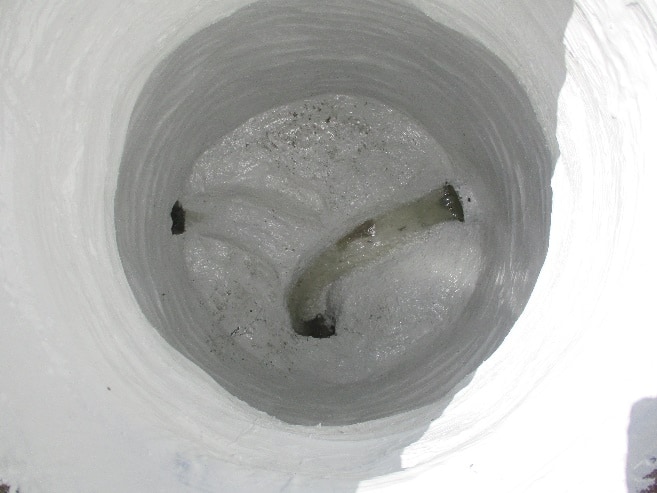 Manhole after epoxy has been applied. This will offer superior corrosion protection.

To accomplish the cured-in-place lining portion of the work, each section of pipe to be lined must first be cleaned and televised. During this operation, each line is checked for ovality and protruding taps. An accurate job on the front end helps to ensure the lining portion of the project goes as smoothly as possible.

Before any liner is inserted, each section is re-televised and all flows are bypassed which presents unique challenges especially in large pipes with large flows. Once the flow is bypassed, the cured-in-place liner is positioned with a Shooter and is steam cured. Steam curing is much more efficient that water curing although in special instances, water curing is still used. Once the liner has cured, each active lateral connection is opened to allow the homeowners to return to normal water usage in their home. The liner installed provides a fully structural liner with a 50 year design life.

Before and after CIPP photos 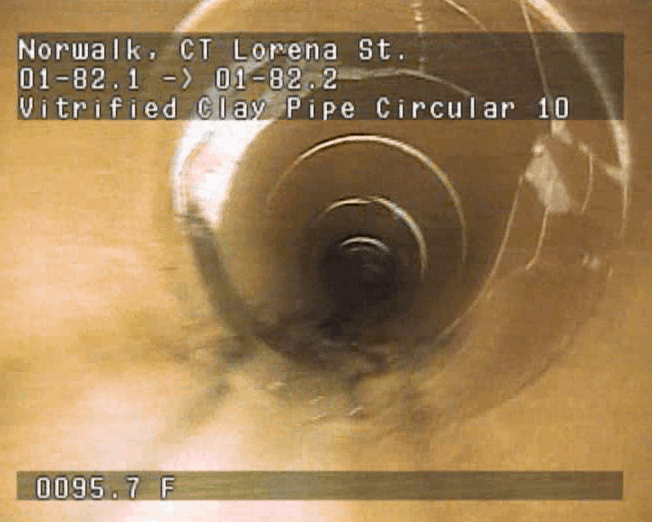 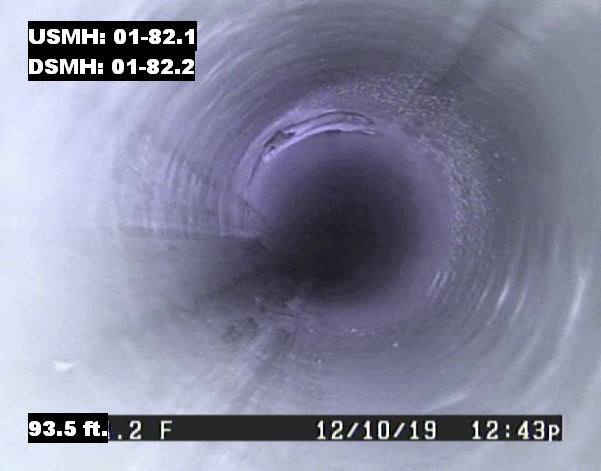 Pipe after structural lining was completed

GMPS’ approach is different than some contractors in that strive to form a partnership with each engineer and owner. Even though the work is publicly bid, once the contract is awarded, GMPS views each project with a team approach. In many of the contracts that GMPS is awarded, owners and engineers add on additional work once they realize the level of workmanship, attention to detail and team approach GMPS provides. This project was no different. The WPCA added an additional $2 million dollars of sewer rehabilitation work to the contract based upon GMPS’ performance.