The story of the Village of Rye Brook is the most recent chapter in the continuing development of the Town of Rye. It is the shared heritage of four communities. Town history began in 1640 when land was purchased from Native American inhabitants. The first colonists to move into the area were settlers from Greenwich, Connecticut. In 1660 they negotiated a treaty with Shenarockwell, a Mohican chief, for all the land along Long Island Sound between the Mamaroneck and Byram Rivers. This parcel of land was called Rye, named after the Sussex England town, Rye, the former home of some of the settlers. There were many changes in property and municipalities along the way, but Rye Brook remained the last unincorporated area in the Town until it became a Village on July 7, 1982.

The Village of Rye Public Works Department employs nine full-time staff members as well as various seasonal employees throughout the spring and fall. Although its primary functions are maintaining streets, storm drainage, and sewers, the Department also prides itself in providing residents with a beautiful place to live.

On April 4, 2018, the Village advertised a bid for sewer cleaning, TV inspection, manhole rehabilitation, and cured-in-place pipe (CIPP) lining. This bid was for a three-year contract period, and it also had the provision for “piggy backing” (meaning other municipalities could use this contract to perform work in their own municipalities by piggy backing on this contract). The work originally consisted of cleaning and TV inspection of 40,000 ft. of sewer pipeline, 2,500 ft. of 8” CIPP, rehabilitating 150 manholes with a cementitious liner, and bypass pumping as needed. The intent of this work was to update part of the Village’s sanitary sewer system by minimizing infiltration and preventing groundwater from entering the pipes and manholes.

Green Mountain Pipeline Services (“GMPS”) was the low bidder on the project, and the company has been working in the Village of Rye Brook for the past 2 ½ years televising 90,500 ft. of sanitary sewer lines, rehabilitating 3,350 vertical feet (VF) of manholes, and installing 25,045 ft. of cured in place lining.

When groundwater enters the collection system, it flows through the gravity pipe system until it reaches a pump station. From there, it is pumped uphill to the closest gravity sewer, flowing downhill on its way to the Westchester County Wastewater Treatment Plant. At the County Wastewater Treatment Plant, the wastewater is treated to NY State standards and released. If the pipes and manholes are leaking due to their aging, treating the extra groundwater becomes very expensive and time-consuming.

One of the Village’s top priorities was to ensure the integrity and safety of the sanitary sewer collection system. The Village asked GMPS to evaluate and recommend a sanitary sewer rehabilitation method for a 10-inch sanitary sewer line which runs under a sidewalk next to Westchester Ave. This section of sewer line had multiple areas of cracks and broken pipe that could potentially collapse. There were the three telephone utility poles running right next to the sidewalk and almost right on top of the sanitary sewer, making direct replacement of the pipeline a difficult choice. The 282 ft. long section of sewer was also located directly adjacent to Westchester Ave., a four-lane state road, Route 120A, with a concrete road base.

Below is a photo of the area of the sewer running right alongside Westchester Ave. 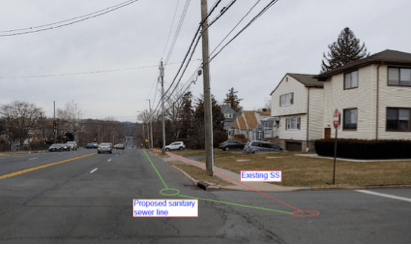 There were multiple areas of pipe that were structurally deficient, which was surprising since the sewer only had soil and hydraulic loads above it and the occasional vehicle in a driveway. 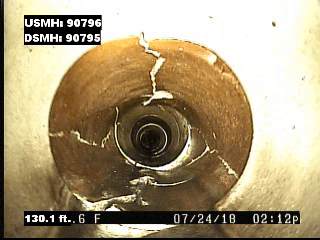 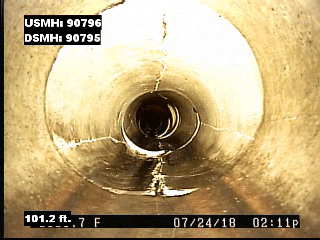 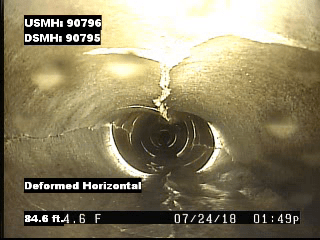 The Village originally hired an engineering firm to look at this sanitary sewer line to determine what could be done. The engineer recommended the sewer be relocated into the right lane of Westchester Ave. for the entire section of pipe or 282 ft. The estimated cost of construction to relocate the sewer line down Westchester Ave. was $500,000. The cost per foot was $500,000/282 ft. = $1,772.00/ft.

Mike Nowak, the Village Public Works Director, approached GMPS to see if they had any potential alternative recommendations. GMPS looked at the video and explained to Mike that if two trenchless spot liners could be installed over the two most severe broken pipe areas, GMPS could confidently install a cured-in-place liner from manhole to manhole. Although the liner might not come out perfectly round and smooth due to the existing shape of the pipe, some folding of the liner was deemed acceptable since the sewer was below the sidewalk and was not directly subject to the live traffic loads. The potential cost savings was dramatic.

The Village of Rye Brook, evaluated the cost to repair the pipe using trenchless technologies, weighed the risks against the possible cost savings, and decided to move forward with a no-dig trenchless solution.

GMPS crew mobilized and installed two trenchless spot repairs, each approximately ten feet long, utilizing Formadrain’s fiberglass spot repair process. This process utilizes epoxy resin and fiberglass mat material to provide a a permanent structural repair. Below is a photo of one of the spot repairs. 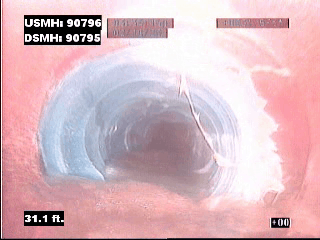 Once the spot repairs were in place, the Village of Rye Brook knew the difficult portion of the job was behind them. GMPS scheduled the lining the same time other lining was being installed in the Village. The line had been prepared, the bypass pumping had been set up and GMPS crews had the liner installed and cured in under five hours.

Here is a photo of the line inside of the pipe after the structural cured-in-place lining had been accomplished. The photo below was taken in one of the areas of severely damaged pipe in which a trenchless point repair was previously installed. 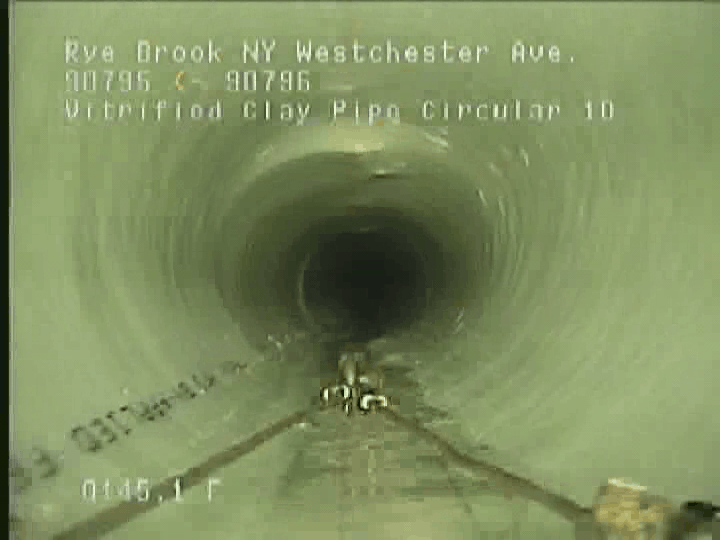 The overall cost of preparing the line, installing the two trenchless point repairs, and lining the pipe was just under $50,000. The Village of Rye Brook saved $450,000 working together with GMPS to find a no-dig structural trenchless solution to renew a very badly deteriorated section of pipe.

Proceeding with relocating the sewer in Westchester Ave. would have added weeks of disturbance, lane closures, noise, dust, and traffic as well as inconvenience to the homeowners affected.

The fact that GMPS performs all trenchless technology work in-house distinguishes the company from most of its competition. The company performs its own cleaning and TV inspection, bypass pumping, welding of HDPE bypass pipe, manhole, mainline and lateral grouting, manhole rehabilitation, liner wet-out, cured-in-place lining, and trenchless spot repairs in house with its own crews. These crews are highly trained, and they take great pride in providing outstanding service to the GMPS customers.