The Town of Westport, CT is located in Fairfield County CT and is a shoreline community affected by coastal storms. In 2019, the Town decided to continue on its path to update its Pump Station No. 2, which was originally built in 1959 and upgraded in 1982. The pump station is located on the western bank of the Saugatuck River and is directly underneath a bridge over I-95. In 2018, the Town completed a very difficult HDD project to install a new force main under the Saugatuck River for this pump station, but that project did not address the pump station itself.

The Town knew that the structure’s components needed to be upgraded. They decided to increase the piping from 8” to 10”, replace the generator, replace all piping and valve, and replace the control panels. The control panels were mounted at an elevation just one foot above the 100-year flood elevation. Lastly, the Town decided to reuse the existing wet well structure and recondition it. This saved the Town thousands of dollars due to the extremely small footprint of the pump station (excavation and replacement would be extremely challenging) as well as its proximity to the Saugatuck River.

The Town of Westport looked at various options and decided to go with the Green Mountain Pipeline Services (GMPS) plan to rehabilitate the structure. They investigated some of GMPS’s previous work and were impressed with their results.

The existing wet-well showed signs of significant corrosion. As part of the pump station rehabilitation, the Town of Westport was looking to repair the walls of the pump station. In the photo below, severe corrosion from hydrogen sulfide is visible. Much of the aggregate in the concrete is also visible, indicating at least ½” to ¾” of wall thickness has been eroded away over time.

The station was scheduled to be bypassed for other parts of the pipe replacement work. Because the station already had to be bypassed, the Town had an excellent opportunity to rehabilitate the structure.

Since the top of the structure also needed to be raised, a new concrete top with a stainless-steel hatch, which is one foot taller than the original, was added. This new top was ordered with an epoxy coating already applied at the factory. As a result, just the walls and the floor needed to be rehabilitated.

The piping was increased in size from 8” to 10”, which meant a whole new level of concrete work was required as well. Once the existing piping and pumps were removed and the new pipe flanges were mounted through the wet well wall, we were able to start our work. The internal walls were cleaned down to solid substrate with high-pressure water. There was a leak at an incoming 8” pipe, which needed to be sealed as well. This was accomplished quite easily with American Chemical Grout’s acrylamide grout ACG-AG Acrylamide Grout MBA Premix. 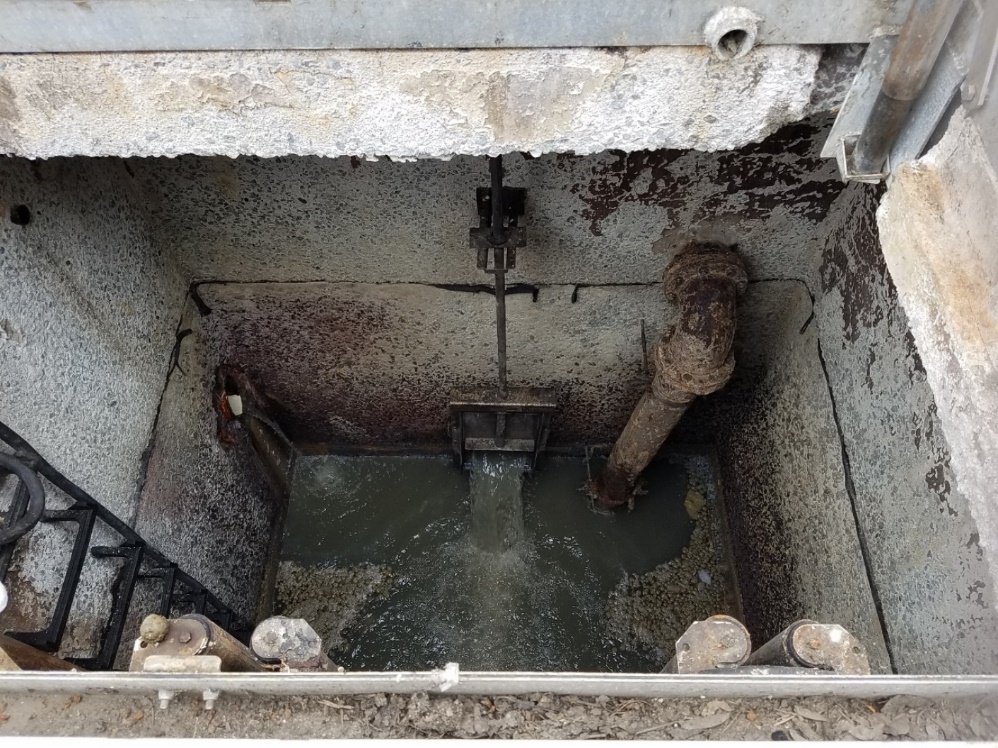 Once the walls were prepared and the leak stopped, we proceeded to coat the entire structure with Strong Seals’ MS-2A product. The Strong Seal MS-2A product is a product we have been using for many years, and we have rehabilitated thousands of underground structures with it. The MS-2A was applied with a spray gun to a thickness of ½ inch. Once applied, the MS-2A was then hand troweled to ensure proper contact with the existing wall substrate. As soon as the troweling work was completed, a brush was used to create a texture in the surface of the MS-2A, which will create a ten-fold increase in surface area for the epoxy to adhere to.

The concrete was allowed to set up to allow the application of the epoxy the next day. Once the concrete was ready, Parsonpoxy SEL 80 was applied at 125 mils. Every inch of the walls and floor was covered. 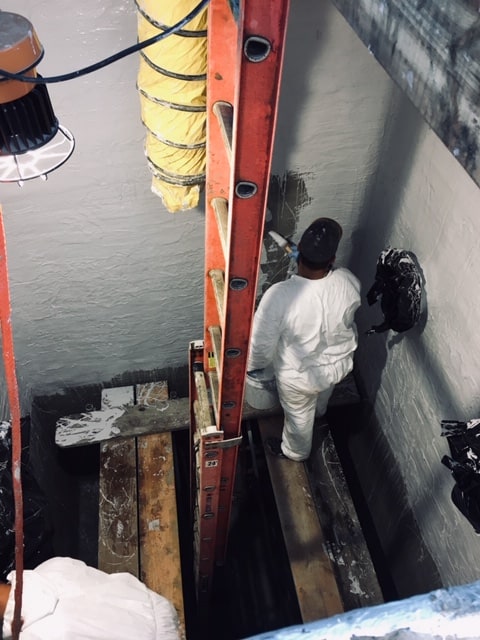 After the epoxy work was finished and cured, the walls were spark tested to ensure there were no pin holes or thin spots in the epoxy coating.

Below is a photo of the wet well after the wall rehabilitation work was completed and the piping and pump base elbows were installed. 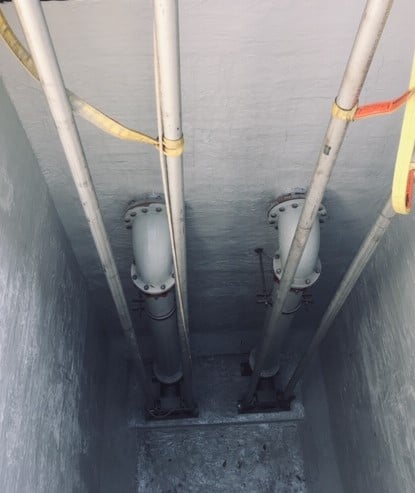